The market turmoil that began in early 2018 intensified later in the year, as the S&P 500 Composite Index declined nearly 20% between its September peak and late December. This slide put U.S. equities firmly in correction territory — typically defined as a 10% decline from a recent high — and has raised questions about whether this could be the start of a much bigger decline. 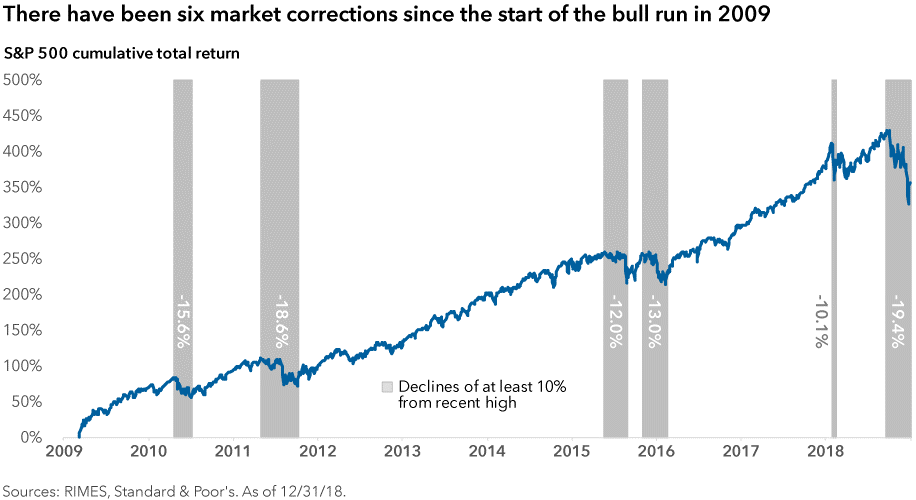 There are countless reasons for short-term market declines, but a prolonged bear market — a drop of at least 20% from a peak — usually results from severe economic imbalances that typically also lead to a recession. The current expansion’s slow recovery has delayed the onset of imbalances for years, but in recent months we have started to see some build, such as corporate debt. In the current environment, these issues don’t seem severe enough to cause a near-term recession, but they will require careful monitoring in the year ahead.

Below are five key points to keep in mind when thinking about market declines:

Market pullbacks are more common than some may think. Even a 5% decline over a short period can feel unsettling, but they occur on average three times per year. Market corrections of 10% or more are also surprisingly common and have happened on average once per year.

The volatility of early 2018 may have felt more jarring than usual because it followed a year that didn’t have a single 5% decline. But the market movements of 2018 are much more typical than those in 2017. In fact, since 1980 there have been only four years that had no such draw down.

While markets may seem pessimistic during periods of heightened volatility, they often bounce back quickly. Despite averaging a double-digit correction per year, 31 of the last 41 calendar years have finished with positive returns. 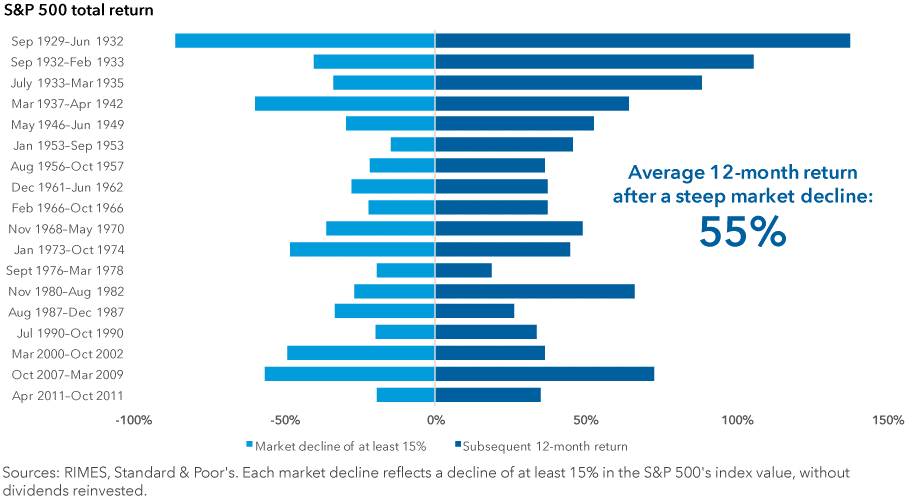 Equity returns are often strongest after a decline when investors believe that the market has overreacted to the downturn. The average 12-month return immediately following a 15% or greater decline is 55%. That’s why it often can pay to remain calm and stay the course.

Over the last 50 years, only eight of 36 market corrections have been classified as bear markets. Most bear markets coincide with recessions, which are also relatively infrequent. In the absence of a recession, a growing economy can still spur positive corporate earnings growth, which supports equity prices. Market declines outside of a recession have tended to be shorter, and rebounded much quicker, than those during a recession. 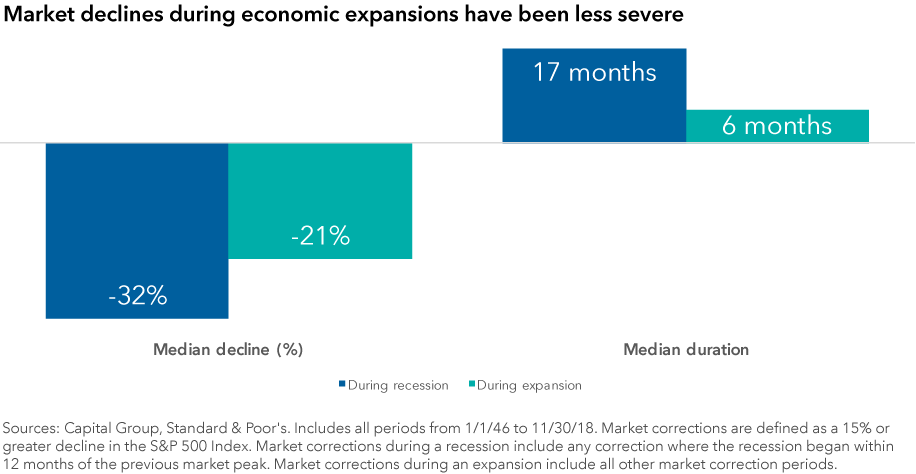 Forecasting the start of the next recession is a difficult task, but it is fairly clear that the U.S. is in the later stages of an extended economic expansion. Recessions usually begin as a result of excesses in an overheating economy, and we are starting to see some early signs of this. Of note, corporate and government debt have been rising steadily. Shadow banking (unregulated financial transactions) is growing, and companies continue to take on debt to make dividend payments, implement share buybacks and fund M&A activity. The effects of tariffs on global trade and growth will also be worth monitoring in the year ahead.

At this time the imbalances don’t seem extreme enough to derail the economy in the near-term, but they do suggest weakness sometime in 2020, according to our economists. If monetary policy continues to ease, the ramifications of those imbalances could be pushed down the road.

A long-term focus can help investors put bear markets into perspective. Since 1949 there have been nine periods of 20%-or-greater declines in the S&P 500. And while the average 33% decline of these cycles can be painful to endure, missing out on part of the average bull market’s 263% return could be even worse.

Bear markets have averaged 14 months, a relatively short time compared with the 71 months of the average bull market — another reason why trying to time investment decisions can be difficult and is usually ill-advised.

Buy low and sell high — it’s one of the most quoted investment phrases, but all too often it’s the exact opposite of how most investors actually behave. Looking at U.S. equity asset flows since the start of the 2008-09 bear market illustrates this.

In 2009, as markets bottomed to levels not seen in more than a decade, investors were net sellers. This continued even as markets rallied strongly over the next few years. It wasn’t until 2014 that investors became net buyers again after they’d missed out on some of the best returns in years. Asset flows reached record levels in 2017 and 2018 — more than eight years into a bull market when markets were reaching all-time highs and valuations were elevated. 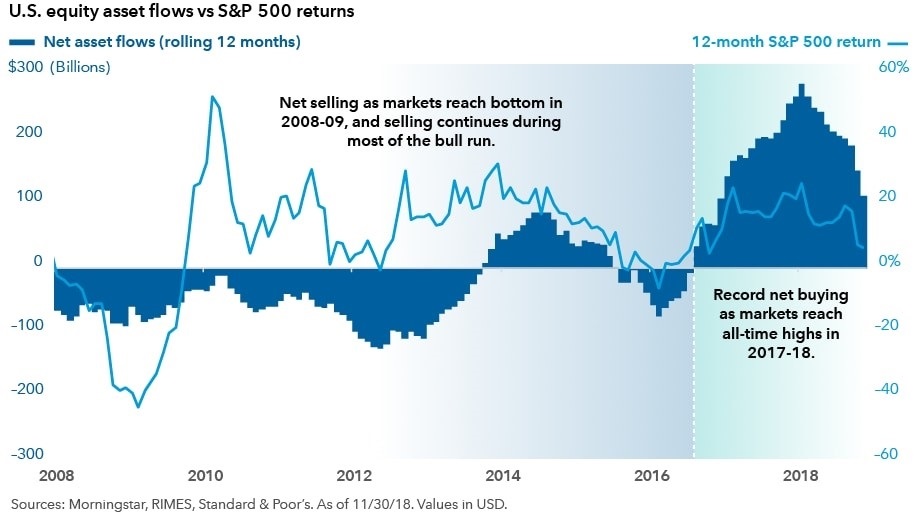 Market declines can be painful to endure, but rather than trying to time the market, investors often are better served by periodically examining their holdings to ensure they are ready for elevated volatility. Investors should have a buffer of liquidity and sufficient diversification. During volatile periods, investors can benefit from:

Written by American Funds for distribution by David Pintaric.