Coronavirus: Our economists weigh in on the U.S., China and Europe

Coronavirus: Our economists weigh in on the U.S., China and Europe

The spread of the coronavirus outside of China to a broader swath of countries in Asia and Europe is fueling a broad re-examination of 2020 global economic growth assumptions. Even with Tuesday’s 50-basis-point rate cut by the U.S. Federal Reserve, our economists say the global economy is headed for a significant slowdown at least in the first half of the year.

The depth and severity of any downturn will depend on how policymakers in the U.S., Europe and China respond, both to the spread of the virus and to changes in the macroeconomic environment. As these events unfold, investors should consider staying the course. Timing the markets can be inherently risky.

Here’s how our economists are assessing conditions in the U.S., Europe and China:

The U.S. remains the most resilient of the world’s major economies

Among the world’s largest economies, the U.S. remains the most resilient. The U.S. economy had been growing above trend with a solid labor market. Industrial sector activity was starting to pick up as détente was reached in the trade war and the General Motors strike ended.

The Fed’s surprise announcement on Tuesday was the first between-meeting rate cut since the 2008—09 financial crisis and clearly shows that the central bank is taking the coronavirus outbreak, and its potential impact on the economy, very seriously. After the announcement, the yield on the 10-year U.S. Treasury note declined to a new record low, falling below 1% for the first time.

The challenge is that stock markets previously had priced in a goldilocks scenario and entered the year with an elevated price-to-earnings multiple of around 18, providing little cushion. On top of that, in contrast to the consumer, a large part of the corporate sector is burdened by high debt relative to its equity, or high leverage. Earnings expectations for 2020 for companies in the S&P 500 were already muted and have come down further given potential supply disruptions. Amid these challenges, the stock market fell more than 12% over the last seven trading days of February.

Based on the current tightening in financial conditions, I expect the Fed to continue on a path of monetary easing. But it’s important to note that central bank policy has limited influence in an economy potentially hurt by both a demand and supply shock.

If the virus spreads further and dampens economic activity, it could easily shave off one percentage point from my base case annualized GDP growth expectation of 2.0%. And if a negative feedback loop persists, I cannot rule out a recession, although that is not my base case scenario. If the situation comes under control relatively quickly, we could see a pickup in activity in the second half of the year.

Around the world, the dilemma for central bankers is that the coronavirus poses as much of a negative supply shock as a demand shock. Monetary policy can influence demand, less so the supply side. Plus, with already low rates in the U.S. and negative rates throughout Europe, there is a severe shortage of policy ammunition.

Central banks can accelerate quantitative easing programs, but that generally has a more limited impact than cutting interest rates. This means governments will also consider fiscal expansion to counter the effects of the virus.

Nonetheless, some of the economic damage has already occurred. China’s factories have remained closed for several weeks and are unlikely to quickly become fully functional.

In addition to manufacturing, an equally important economic impact may lie on the services side. On the manufacturing front, companies can catch up when things return to normal: firms ramp up production and rebuild inventories, producing a bounce-back recovery. But on the services side, lost GDP is not often recovered, whether it is the vacation that was not taken or the restaurant meal that was not had. This is why it is much more difficult to estimate the impact of the virus as compared to, say, a natural disaster.

With China now making up almost 20% of global gross domestic product, China’s slowdown from this outbreak will probably have broader impacts than the SARS outbreak in 2002 and 2003. We know for the past month that most people in China have stayed at home and haven’t returned to factories or offices. I believe that China’s economy, which was already growing at the slowest pace in 30 years before the outbreak, will experience negative growth in the first quarter, and a mild growth recovery is likely in the last six months of this year.

When we’ve pressed our industry contacts about the timing of workers returning to manufacturing plants and offices, we have heard that mid-March is a possibility. But analyzing the situation on the ground, I don’t think the Chinese economy will normalize until April at the earliest.

Factory operators must get permission from local government to reopen, and health inspections have to be done. Many cities and industrial zones can require 15 certificates to operate. Factories need enough material on hand to make the product and workers have to be back at full capacity. Once the goods are produced, ships have to be at the port. Once you’ve produced the goods, they need to get to port and then to their end destination. 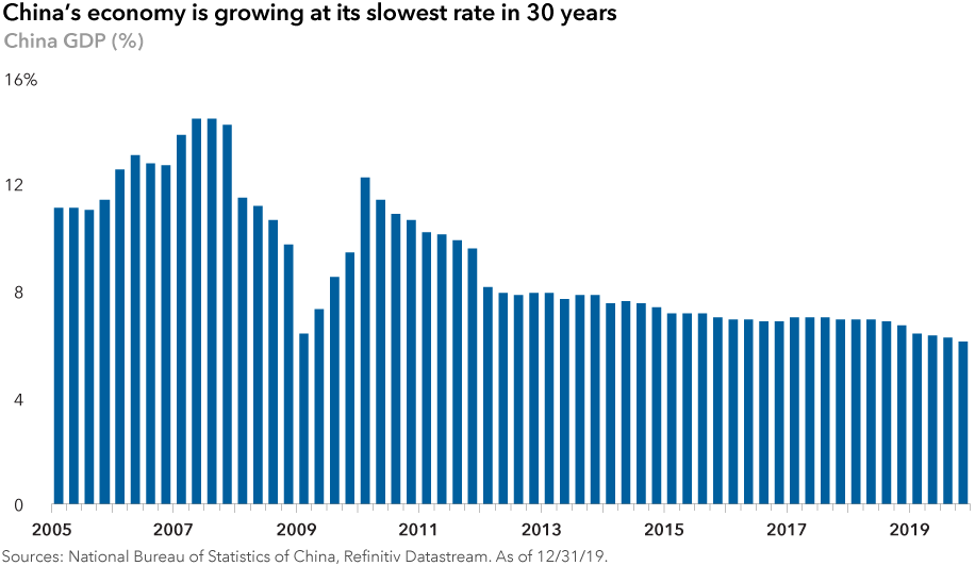 In early signs of a slowdown, the February factory PMI fell to a record low of 35.7 — compared with a market-consensus estimate of 46. The non-manufacturing PMI fell even more significantly, down 24.5 points to a record low of 29.6 in February, reflecting the scare factor and disruptions in transportation, suggesting a broad-based contraction in the economy.

Compared with other countries, Chinese party leaders have a wider arsenal of tools at their disposal to stimulate the economy.

For example, they could cut benchmark interest rates by 200 basis points and still be well above zero. They can also provide fiscal stimulus as the country’s deficit is below 5% of GDP. Financing infrastructure projects such as bridges, tunnels and subway lines through bond issuance is an option. Recently, many cities have begun to decrease the percentage of money needed for a down payment to buy an apartment. And the government has told banks to extend loan repayments coming due for small- and medium-sized businesses.

How effective any of these tools will be depends to a large extent on whether workers feel safe enough to return and confident enough about their prospects of buying an apartment.

With major European economies growing only marginally before the outbreak, it is increasingly likely that the widening epidemic could push the eurozone into a recession in early 2020. The risk is most evident in Italy where more than 2,000 infections have been reported, as of March 3. If the virus spreads further, it could deliver a significant shock to one of the eurozone’s weakest economies. A sharp downturn in Italy would inevitably feed into the rest of Europe, weakening the entire region in the process.

Beyond that, Europe has significant exposure to China’s economy. Falling demand from China, coupled with a breakdown in supply chains, would hit the European economy — with Germany and the U.K. exposed to weaker demand for goods, and France vulnerable to weaker tourism. Luxury goods, electronics and autos would be among the most negatively impacted industries. 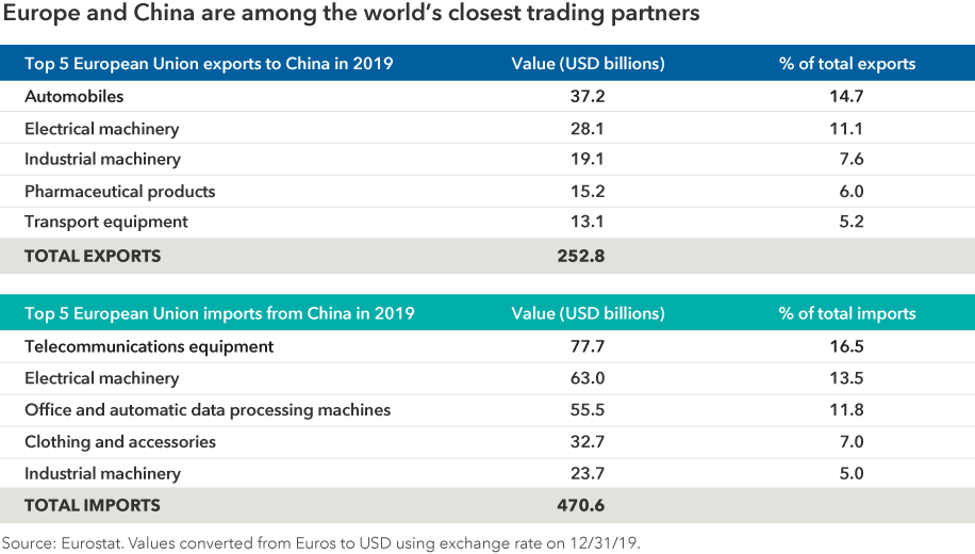 In 2019, the eurozone economy grew at an annualized rate of 1.2%. At such a low level, it doesn’t take much pressure for economic growth to go flat or negative. Before the outbreak, Europe was showing tentative signs of recovery from a protracted industrial slowdown.

Given recent events, European Central Bank officials will probably feel the need to do something in the face of a widening outbreak. ECB officials are increasingly conscious of the impact of negative interest rates on the banking sector, which might deter them from lowering the deposit rate. But they may decide to increase their bond-buying stimulus program from a current level of €20 billion a month to something in the range of €25 billion to €30 billion a month.

In this environment, there also will be greater pressure for a fiscal response from governments. In the event of a serious downturn, I’d expect more aggressive fiscal easing, including tax cuts and higher government spending.

Jared Franz is an economist covering the U.S. and Latin America. He has 15 years of investment experience. Prior to joining Capital in 2014, Jared was head of international macroeconomic research at Hartford Investment Management Company and an international and U.S. economist at T. Rowe Price. He holds a PhD in economics from the University of Illinois and a bachelor's from Northwestern.

Robert Lind is an economist with 31 years of industry experience, two at Capital Group. He previously worked as group chief economist at Anglo American and was head of macro research at ABN AMRO. He earned his bachelor's degree at Oxford.

Stephen Green is an economist covering Asia. He has 16 years of investment industry experience. Prior to joining Capital in 2014, he was head of research for Greater China at Standard Chartered Bank in China and Hong Kong. Before that he ran the Asia program at Chatham House, the U.K. think tank. He holds a PhD in government from the London School of Economics and an honors degree from Cambridge.